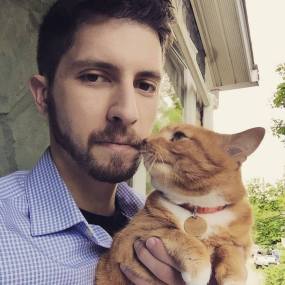 Nicholas Siegel is a fiction writer and freelance journalist from Louisville, KY who earned his MFA in Creative Writing at Spalding University. His fiction has appeared in Bird’s Thumb, Literally Stories, and Five on the Fifth. He currently works as the full time Content Editor for the Sullivan University System and is a lover of bourbon, coffee, music, and cats. You can see his work on his website:  nicholassiegel.squarespace.com.

What type(s) of writing do you regularly engage in?

I mainly write fiction—usually short stories, but I’m also working on a novel. That’s what I studied during my MFA, and it’s my favorite type of writing to do.

I’m also a freelance journalist for a few different local magazines and currently working as Content Editor at the Sullivan University System. It’s nice having the opportunity to do three types of writing that tap into some similar parts of the mind but are vastly different in execution.

When/where/how do you write?

For my fiction, I like to write at my desk at home. I have a small apartment on the second floor of a fourplex, so it’s nice to have my deck door open as I write. I also spend a lot of time doing work in coffee shops, because I enjoy being around other people, even though I’m not interacting with them. As someone who usually feels torn between introversion and extroversion, it’s the perfect compromise.

There really isn’t a specific writing time—just when I’m not at work or out with friends and family. As for how, I use a word processor called Scrivener on my Macbook. It’s been a big help for organization.

What are your writing necessities—tools, accessories, music, spaces?

I like to write in Moleskine notebooks, probably because I have some deep-rooted pretension or insecurity and want to be validated as a writer. Really, though, if I have a notebook that’s on the pricier-side, I’m more inclined to take care of it.

And as I’ve mentioned, I love Scrivener. I don’t use half of the features, but the ones I do use are a huge help. It’s humbling to remind myself that someone like Vonnegut wrote his novels on a typewriter, or that Nabokov filed away scenes on notecards in shoeboxes, but if the technology exists to make my job more pleasurable, I’m going to use it.

What is your best tip for getting started and/or for revision?

Just start writing. Don’t worry so much about whether your first paragraph is exactly where you want to start. You can change that later. Try not to revise as you write. I’m guilty of this, and it slows me down a lot. Get a draft out, as bad as it is, and then go back through and change it.

I doubt I’m the only person to use this analogy, but I like to think of a story’s first draft as a block of stone. Revision is the process of hacking away at it to make a sculpture. You have to get something down to work with in the first place, and you aren’t going to write a sculpture on your first shot, no matter how good you are.

What is the best writing advice you’ve received?

The best advice I’ve been given about writing has been repeated by many people I admire: just write. We come up with all sorts of excuses not to—time, mood, etc. You can’t wait for the muse to strike, or else you’ll only be cranking out a few short poems a year if you’re lucky. When the muse is there, it helps, but it usually isn’t.

In the end, the only thing that separates a writer from anyone else is that a writer writes…a lot. It’s not about skill, or publications, or financial success. It’s just about practice.